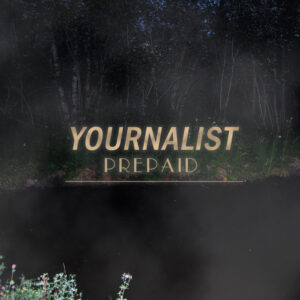 Spotify
iTunes
Soundcloud
Youtube
Yournalist, a Turku, Finland based rock trio have just released a new single called Prepaid. It’s the first single from their second album, Plays Jazz, which will be released in February.

Prepaid brings you some hard guitar banging, as well as introduces you to the more emotional side of the band. The song is written by Yournalist. Also known as Mikko M. Koskinen (drums), Oskari Ruohonen (guitar/vocals) and Santeri Ruohonen (bass).– “The song was born in the attic of Mikko’s parents’ house. At first the tape caught a somewhat weird minute-a-half of music-like noise. But we all knew there was something there. So we picked up the best parts, added the middle section and before we knew the song was basically done,” says SanteriIn their forthcoming album, Yournalist sees the world in the point of view of a twenty-something man. The themes being hot mamas, highways, partying, pills.. to name a few.– “The guy in Prepaid likes to be his own master. He doesn’t like to take any risks financially nor relationship-wise. Thinking of getting married to this guy is a pipe dream. Even such a normal thing to do for a grown up couple in a long term relationship, like opening a joint bank account, feels like the end of the world,” the trio describes.This Rock/Pop/World Music combo known as Yournalist is also a blazing live act. In addition to touring in their homeland, Yournalist will perform a few shows in The Baltics later this month. UK tour is due to April 2014.Plays Jazz will be released by Drink Tonight Records.