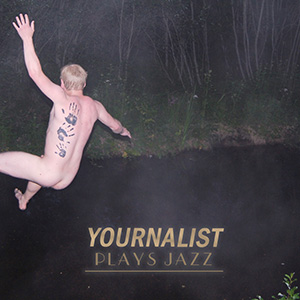 Yournalist released their second album Plays Jazz today. The album is a bittersweet cocktail made out of pop and rock plus a little bit of everything. Themes in the album are food, sex, partying, pills, hot mamas and highways.. to name a few. The opening track on Plays Jazz, Italian Luigi, is the third and final part of ‘People of the world’-trilogy. Yournalist spent months in the middle of nowhere recording their debut album (Horror And Terror, 2012). This time they chose a little less exotic location; in the middle of the city, the legendary Studio-JJ in Tampere.

Yournalist played live in studio so that the energy of the live shows would be captured on tape as authentically as possible. The album is written, produced and mixed by the band itself (Oskari Ruohonen, Guitar/Vocals, Santeri Ruohonen, Bass, Mikko Koskinen, Drums). In addition to the basic rock-trio instruments there are plenty of visiting musicians contributing to the album, including violinist, cellist and trombonist. Also on Plays Jazz piano and keyboards play much bigger role than on the debut album.

Plays Jazz is an elegant selection of song from the most hipster band in Finland.